Hadassah Medical Centre reported success in the first phase of the Israeli COVID-19 Vaccine trial! The first clinical phase of testing the Israeli Biological Institute’s corona vaccine was completed at Hadassah Ein Kerem when the final dose was given to the 40th trial participant.

Those vaccinated at Hadassah’s Center for Clinical Research were aged 18-55 and without pre-existing illnesses. They will be closely monitored by the Center’s staff, including medical examinations, phone updates and sharing their health status in a dedicated phone app.

Center Head Hannah Drory shared: “Communication with the participants is excellent in the first phase of the experiment. We receive regular updates from them and the cooperation is wonderful.”

Center Director Prof. Yossi Karasko commented: “We’re pleased to announce that the first phase of corona vaccine clinical research has been a success. From monitoring the participants who have been vaccinated so far, we see no unusual side effects, and this seems promising in terms of safety, which is the point of the first stage of the experiment. We can now look forward to the next stage.

Hava Cohen Ayoubi, 30, from Negohot in the southern Hebron hills, one of the participants, shared: “Ahead of my last birthday I realized all I wanted was to do some good in this world. Testing showed I was a suitable candidate for the trial. The fears dissipated as soon as I entered the center. The staff was extremely professional and careful. It’s already a few days since the vaccination and I feel really great.”

After years of unsuccessful fertility treatment, Sarah’s* dream of becoming a mother finally seemed possible when she heard she was pregnant. Yet, as her pregnancy developed, so did her fears and anxieties. Just when she thought she might lose control, she joined the ‘Let’s Talk’ support program for expecting mothers at Hadassah Hospital.

They also didn’t know how to answer the many questions that sprang through my head:  Who would be able to help me with my crippling fears?  My sleepless nights?  What would happen during the C-section? What were the risks? Who would be the first to care for our baby when she’s born? Who will ensure she’s fine?

During the most exciting time of our lives, I somehow turned into a very anxious and stressful person.  I didn’t know how to relax and I felt embarrassed to even speak about my condition.

This pregnancy was dear to our heart.  After years of fertility treatment with many disappointments along the way, I was finally close to full term. I’ll never forget the moment we heard we were having a baby girl!

Despite the incredible care and the many reassuring check-ups, I grew increasingly worried about the pregnancy.  I felt out of my comfort zone and out of control. Thankfully, that’s when I heard about ‘Let’s Talk’ – an innovative program at Hadassah that encourages expecting mothers to come and share the roller-coaster of feelings they’re experiencing just before they’re about to give birth. The initiative provides an outlet where you can talk, share your story and even calm down before the big day!

A few weeks before giving birth, I was lucky to meet with Noah Brurman, the Head Midwife at Hadassah Hospital in Ein Kerem.  She walked me through every step of the way and told me about the surgery and the medical staff.  She provided answers to my many questions.  I slowly felt that my entire body- including my pregnancy belly- was finally able to relax.  My husband said he noticed I left the hospital happy and even smiling that day- something I hadn’t done in a long time!

When the big day finally arrived, I knew I was in good hands.  My surgeon was familiar with my background history and all my personal challenges.  He was so warm and friendly and smiled throughout the procedure.  It was truly an incredible and positive experience!

But my story doesn’t end here.  Noah Brurman, the Head Midwife, remembered the date of my scheduled C-Section.  She decided to stop by and surprised me.  She also stayed next to me throughout the entire surgery.  She told me it was important for her to be at my side.  I honestly had never come across and never imagined such dedication existed in one’s profession!

I feel so grateful and lucky.  Today I am hugging my beautiful daughter that has completed our family.  My birth experience at Hadassah was an empowering one, thanks to the incredible Let’s Talk program and the dedicated staff. 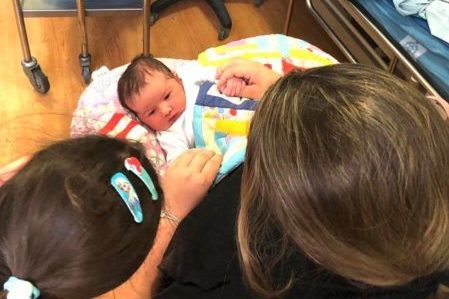 Hula was playing with her siblings at home when suddenly her head started to hurt.

Her father Muhammed explains: “She suddenly dropped to the floor, screaming from pain. We tried to lift her up, but we quickly realized that she could not move.”

Her condition deteriorated so quickly that Hula’s parents immediately called an ambulance. Luckily, the family lives just a few minutes away from Hadassah Hospital Ein Kerem.

She arrived at Hadassah Hospital with agonizing head pain and signs of paralysis on her entire right side- from her face, to her arm, and all the way down to her leg.

The signs of a stroke were obvious to Professor Cohen, Director of the Brain Catheterization Lab. “Yet, we were very surprised, as we had never seen such a young stroke victim,” said Prof. Cohen.

The CT and MRI confirmed that the 7-year-old was experiencing a stroke and was in immediate danger. The stroke was caused by a blood clot that had formed in her heart and then travelled to the brain, blocking the flow of blood.

Hula was immediately operated on by a highly specialized team in the Catheterization Lab. The surgery was complex, made even more so by the fact that Hula suffers from a rare heart defect.

Miraculously, Hula beat the odds. The surgery was a success and within a few days Hula had recuperated.

Professor Cohen shared, “Two out of every 100,000 children suffer from strokes each year.  Yet only one in 10 million children need catheterization, as was the case with Hula!” 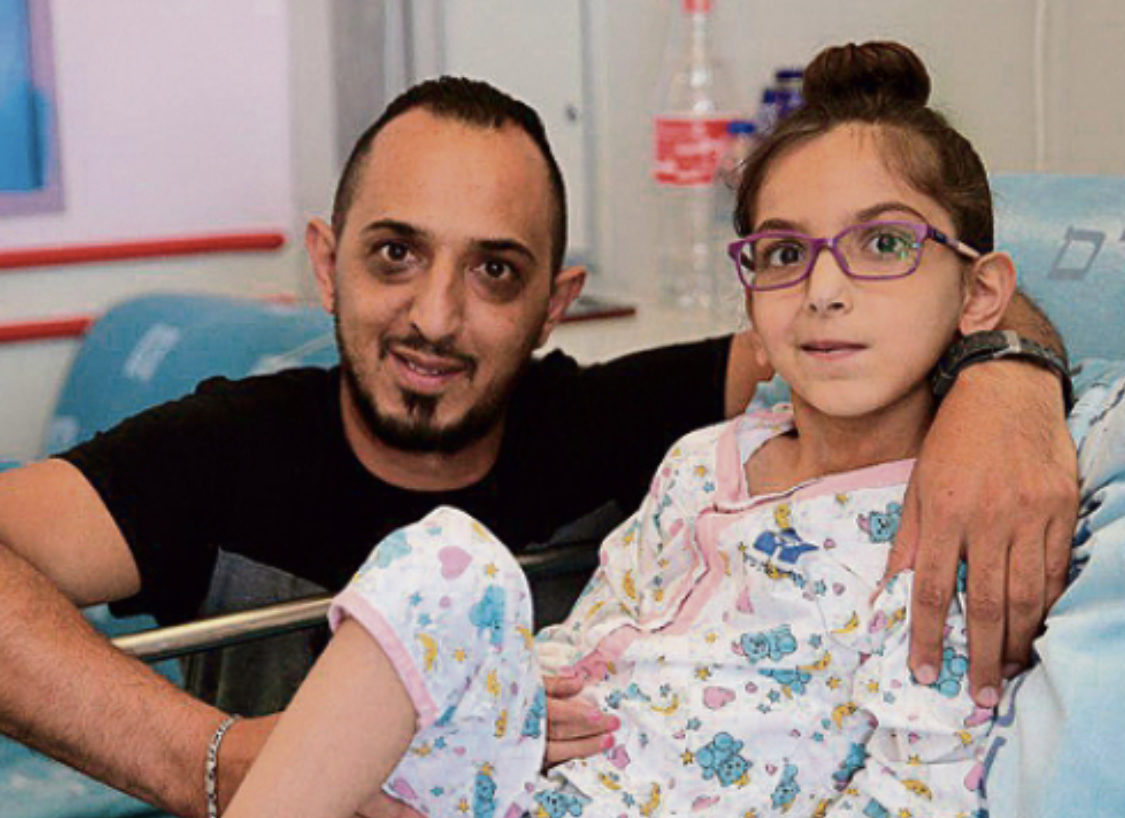 Hula and her father in the hospital.

Recently, two-year-old Omri, was playing at the park. He ran over to his mom, Netta, who was sitting on a bench watching him. As Omri ran towards her, a metal bar from a nearby building site fell and hit Omri, amputating his thumb.

Netta rushed over to her son, who was bleeding and crying. She immediately took him to Hadassah Hospital. Upon arrival, the medical team sprang into action.

Dr. Carole Pidhorz, Orthopedist and Head of the Center for Hand and Microvascular Surgery, worked together with Dr. Yonathan Wagmen, Surgeon, to help Omri. The physicians performed a microsurgery under a microscope. Through this approach, they were able to successfully reattach Omri’s thumb. The doctors shared that a thumb is a very difficult extremity to reattach; however, it is very important. Both were impressed with Netta’s quick thinking to ensure to find the thumb and bring it to the hospital with Omri. 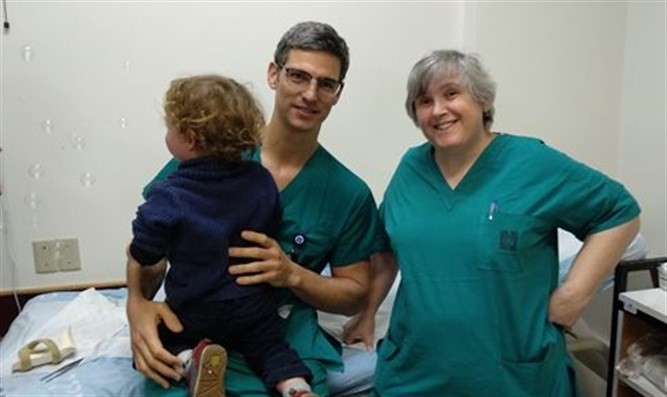 A team of doctors from Hadassah Hospital have traveled to Ethiopia with the sole purpose of helping in the fight against infectious diseases.

The team, comprised of Prof. Allon Moses, Chair of the Department of Clinical Microbiology and Infectious Diseases, Carmela Schwartz, Nursing Director of Ambulatory Center for Infectious Diseases, Dr. Shmuel Benenson, Head of Infection Prevention and Control Unit, and Tamara Zeiter, Senior Microbiologist, created one goal for this trip: to prevent the spread of infectious diseases.