Prof. Yoram Weiss of Hadassah Hospital was recently quoted in the Washington Post about the COVID-19 Delta variant and how even though infection rates in Israel are increasing, very few of them are becoming seriously ill.

Following an evening of heavy rocket fire across southern and central Israel, Health Minister, Yuli Edelstein, visited Shamir Medical Centre (Assaf Harofeh) emergency teams.  The Director General of the Hospital, Dr. Osnat Levzion-Korach, guided the Minister through the state-of-the-art Emergency Department and Intensive Care Unit that are currently treating an influx of patients injured during last night’s outbreak of violence and the state of emergency declared in the nearby city of Lod.

Shamir Medical Centre, located just south of Tel Aviv, is the fourth largest hospital in Israel and serves one of the largest most diverse catchment areas in the country.

*some details were changed to protect the privacy of the family

Little Alma woke up in the middle of the night crying in anguish. Her mother, Jana, tried everything to soothe her cries, but nothing seemed to help the severe stomach pain Alma was experiencing. Alma had always been a healthy and happy toddler, so as her condition worsened, Jana feared the worst. Jana wrapped her daughter in a blanket and rushed her to the emergency room at Shamir Medical Centre.

Alma was immediately admitted to the CHW Debbie Eisenberg and Gary Levene Pediatric Intensive Care Unit (PICU), where the experienced medical team were quickly able to stabilize her. After a series of tests in the new, state-of-the-art facilities, an ultrasound of the abdomen revealed that Alma had swallowed five small magnetic balls, pieces from a toy recently given to her older sister.

Dr. Adi Kanushi (see image), one of Alma’s pediatric surgeons, said, “This was a life-threatening medical condition that could worsen to the point of creating a hole in the intestine and a widespread infection in the entire abdomen.”

Lucky for Alma, the surgical team at the CHW PICU was able to successfully remove all the magnets, leaving the little girl with no permanent damage. 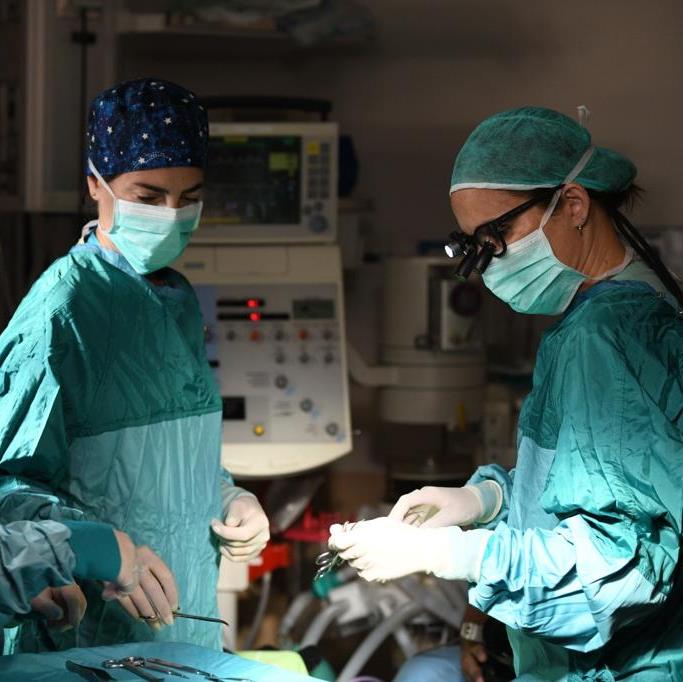 With the ordeal now behind them, Jana was relieved to share:

“We had no idea that Alma swallowed anything; let alone something so hazardous. It was the scariest night of our lives, but we felt reassured the minute we walked into the CHW PICU. We knew that our daughter was in the most caring and capable hands. As parents, we’re so grateful to the entire team for their life-saving work.”

You can make a difference in the lives of children like Alma by supporting the CHW Annual Campaign.
Support healing, transform lives.

*Andre suffered excruciating pain as a toddler. He spent months at a time in the hospital, undergoing multiple extensive surgeries to treat a chronic intestinal disorder. When his family left the Former Soviet Union, his parents were deeply concerned about how they would manage in Israel.

Shortly after arriving, Andre’s condition deteriorated. He could barely eat and lost critical weight and vital nutrients. In the midst of COVID-19 lockdown, Andre developed a high fever and severe abdominal pains. Fearing the worst, his parents rushed to Shamir Medical Centre (Assaf Harofeh) where Andre was admitted to The Debbie Eisenberg and Gary Levene Pediatric Intensive Care Unit (PICU). The medical specialists took extra precautions and treated Andre in the department’s isolation room. This reassured Andre’s parents. They felt their son was in the best of hands in the state-of-the-art facilities.

The dedicated pediatric team stood by Andre and his family throughout the hospitalization period. As Andre continues to recover, he is feeling better with each passing day. He’s regaining strength and even walking about- just in time for his 8th birthday!

*some details were changed to protect the privacy of the family

The Shamir Medical Centre (Assaf Harofeh) has been flooded with Thank You letters from patients and families affected by COVID-19.

Galia, a patient who was recently treated for COVID-19, wrote this moving letter:

‘I arrived at Shamir Hospital (Assaf Harofeh) a week ago with a serious respiratory condition and after five hours of check-ups and tests, I was admitted into the Coronavirus Ward. I was immediately greeted by a nurse named Ibrahim, who was full of compassion and empathy. He took great care of me and helped me calm down.

The next day I met another amazing nurse, named Etty. I simply don’t have enough words to express my gratitude for her as well. She is a ray of light, a true professional and also so warm and humane. Thanks to her, I am alive today.

I was literally met by angels in the midst of such a difficult, isolating and scary place. A place where you struggle for each breath. I knew I had to keep fighting off the virus, because if I didn’t relax and breathe- I simply will cease to be. It was absolutely frightening.

Beyond the physical pain, there are also the mental health challenges. I’m so lucky I received such a wonderful nurse. She was my lifeguard and kept encouraging me. She never gave up on me.

To the incredible team: Thank you for all you have done for me. You have saved my life and for that I’m hugely grateful. Thank you from the bottom of my heart.”

Provide healthcare, education, and social services to at-risk children and families. Ensure every human being can achieve their full potential, while living in safety and security.